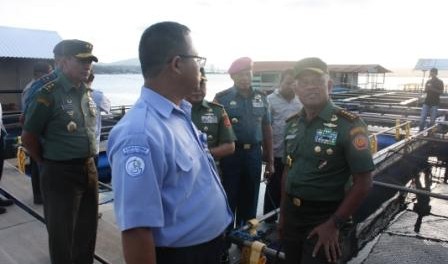 For faster growth, Bubara is the best choice.
The most reliable commodity of cultivated fisheries in Indonesia is now having more and more variants. Although seaweed and vaname shrimp are still the majority, in some government fishery association, the ‘black horse’ commodities are also showing promising potentials.
While BPBL Batam has the Snubnose Pompano (Bawal Bintang), and BPBL Situbondo has its hybrid grouper, BPBL Ambon is now developing the cultivation of the bubara or kuwe fish.
The head of the Marine Cultivated Fisheries Association (BPBL) Ambon, Tinggal Hermawan, S.Pi, M.Si, said that currently, the live bubara fish market in Ambon is dominated by demands from restaurants, reaching up to 400 kg / week / restaurant. The selling prices ranges from IDR 60,000 to 70,000/kg.
“The prospect of current bubara fish cultivation is deemed highly profitable, with high demand for its seeds domestically,” said Tinggal.
“Therefore,” the Young Engineer or the Main Person in Charge of the Hatchery Division of BPBL Ambon, Hery Slamet, M.Si said, “BPBL Ambon’s current priority is to produce the bubara fish seeds which now has constantly reached 40,000 fish/cycle, while the clownfish seed production has reached 20,000 fish/month.
In addition, bubara fish is known for its shorter growth period (5 months) compared to other commodities, hence making this bubara fish worthy of cultivation.
Before, BPBL Ambon has gradually succeeded in increasing the seed production of duck grouper, tiger grouper, and vaname shrimp cultivation in floating marine cages. Therefore, they are surely capable of doing the same with bubara fish within its territory.
BPBL Ambon is currently also cultivating the giant grouper, leopard coral grouper, and also other marine collections, such as the cultivation and spawning of beautiful coral fish on the verge of extinction.

“One of the achievements of BPBL Ambon is as the best duck grouper egg producer in Indonesia,” Tinggal added.
BPBL Ambon is one of the technical service units of the Directorate General of the Cultivated Fisheries (DJPB) located in Ambon or eastern regions of Indonesia, from Sulawesi to Papua.
Heru stated that BPBL Ambon has performed various engineering, such as fish seed and seaweed production, as well as consumable fish cultivation. The result of such engineering activities has been implemented among the community through dissemination activities.
“All those activities are basically designed to be the basis of policy making in the development of marine cultivation, especially in East Indonesia, but also in all Indonesia in general,” Heru said.
Hatchery and Growing in marine cage HDPE Aquatec
This fishery association which has become the role model in East Indonesia has performed the development of bubara fish hatchery in 2012, and the success of bulk hatchery was achieved in mid 2016.
Right now, Heru explained, the bubara fish seed produced has been distributed among the cultivator groups through seed support programs. “According to bubara fish cultivators, the seeds from BPBL Ambon has very fast growth rate with high SR,” Heru stated.
The bubara fish hatchery activity starts with selecting healthy fish with no defect. The ratio of male and female fish used is 1:1. The parent fish which will be spawned are moved from the HDPE Aquatec cage to the main tank. Bubara fish spawns during bright moon around the 14th and 15th day in hijriah calendar. The cannulation procedure is performed on the fish which will be spawned in order to determine the optimal gonad maturity level (TKG).
The parent fish are injected with hormones twice, and they will spawn. During cultivation, the parent fish are fed with rucah fish and multivitamins. The eggs are harvested in the morning and hatched in the indoor larva hatchery cultivation tank.
During the nurturing, the bubara fish are put in the HDPE cage. Aside from having relatively short growth period, this fish also has high tolerance against environmental changes. It is also easy to obtain seeds from nature, hence the cultivation and nurturing techniques are considerably simple. This fish also has high immunity against diseases.
Fishery cultivation, especially bubara fish, in HDPE cages is one of highly prospective businesses to be developed in Indonesia, considering the vast potential of marine and fisheries.
To answer the existing technological challenges of the growing marine fisheries cultivation, a modern marine cage facility and infrastructure is necessary in order to improve the efficiency and effectiveness of cultivation, so that the cultivation and nurturing activities become more competitive, economical, and profitable for business.
As of now, BPBL Ambon owns 80 Aquatec HDPE marine cage for the cultivation of various commodities. According to Tinggal, the Aquatec HDPE cage is the one BPBL Ambon deemed most reliable due to its well tested quality and durability.
“What makes us choose the Aquatec marine cage is because of its easy maintenance, efficiency in maintenance cost and time, and its durability against high waves,” Tinggal said.
Moreover, Aquatec marine cage also uses smooth Japanese standard knotless nets. With such knotless nets, the the fish scales are preserved, hence improving their survival rate (SR).
This condition is an opportunity which BPBL Ambon continually seizes to make this commodity a major player in cultivated fisheries, as well as to improve the welfare of the coastal society, the fishermen, the cultivator society, and the fishery business industry.