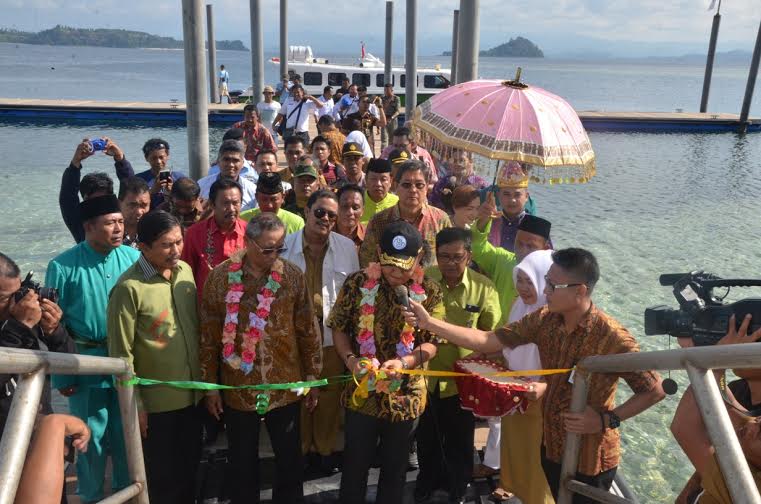 OFFICIATION PICTURE : The Director General of the PRL KKP of the Republic of Indonesia, Brahmantya Satyamurti Purwadi, ST, along with the Regent DR. Indra Yasin, MH, the Director of PT PAL Indonesia, Ir. Moh. Firmansyah Arifin, Vice-Regent Drs. Roni Imran, and some other government officials during the ribbon-cutting ceremony which symbolizes the formal dedication of the floating jetty in the isle of Saronde, Monday (25/4).

NORTH GORONTALO – The Director General of the Sea Space Management (PRL) of the Ministry of Maritime and Fisheries Affairs of the Republic of Indonesia, Brahmantya Satyamurti Purwati, ST, officiated the utilization of floating jetty which was built in the touristic location Saronde through the ministry of maritime and fisheries affairs in the year of 2015 with a budget of IDR 5 billion. The dedication was accompanied by the Regent DR. Indra Yasin, MH, Vice-Regent Drs. Roni Imran, the Director of PT PAL Indonesia Ir. Moh. Firmansyah Arifin and some other government officials, Monday (25/4), and was witnessed by the local people and visitors.
In his forewords, the sea space director general Brahmantya Satyamurti Purwadi stated his intent to assist the government of the North Gorontalo District in the area of maritime and fisheries affairs for the purpose of making Indonesia a maritime country. According to the minister, the construction of this floating jetty is designed to open access to the outer islands, as well as to facilitate transportation access for the isle, including the isle of Saronde which happens to be a tourist area.
“I have been lucky this whole day. I joined the seminar, directly observed the maritime condition and met with the fishermen of North Gorontalo. I hope for the maritime and fisheries potential to be developed based on the local wisdom, and I want the people of North Gorontalo to be independent in managing the existing potentials. Therefore, utilize us as the government. When you need research, we will provide resources from research and development, when you need training, we will provide, and when you need help, it shall be arranged immediately, the same goes with working capital needs,” the Director General explained.
Meanwhile, the Regent DR. Indra Yasin, MH in his foreword stated that the isle of Saronde is a tourist area of North Gorontalo which is in currently undergoing development. To the Director General and a number of guests, the regent said the local government together with the developers of the isle of Saronde are currently building the supporting infrastructures in order to invite tourists, both foreign and domestic. “Today the floating dock facility has been officiated. In the future, the facility in this isle of Saronde will be continually improved, such as the building of floating nets for fish, so the visitors can utilize them for fishing. In addition, we will build a connecting bridge between the isle of Saronde and the isle of Mohinggito, which happens to be approximately 700 meters apart. This is done to provide access and safety for the visitors. We are also exploring the idea of building a sea aquarium, which will be utilized for maritime research and development purposes. Of course, all these will run well with the support from everyone, including the ministry of maritime and fisheries affairs, in assisting the local governments.
The government of the North Gorontalo District, according to the regent, will always support the programs of President Joko Widodo to make Indonesia a maritime country through various maritime and fisheries programs.